For my annual online exhibition last fall, I chose to exhibit, for the first time, 12 pieces from a body of work collected under the title “Vocal Color.” I conceived of these when I saw, in four different cities, concentrated exhibitions of Mughal painting, as the nation of India was then celebrating its 50th anniversary of independence from Britain.

The Indian paintings inspiring me had often been bound into books, to illustrate stories, poetry, or the lyrics of songs; I showed them to poet Vasiliki Katsarou, when we began discussing an event to be hosted in my Lambertville, NJ studio. Last year I offered my space as a venue for one of Vasiliki’s scheduled poetry readings, and she decided to invite poets to compose ekphrastic poetry on the theme “Chroma,” accompanied on my walls by works selected by the poets.

The poets viewed my work via my website, concentrating on the “Work On Paper” section of my portfolio. The eleven writers presented today chose, as jumping-off points for their poems, these works, which I then mounted on my studio walls for the reading on April 1, opening National Poetry Month.

This project turned into something more than I ever would have imagined, and I have to credit Vasiliki Katsarou, and thank her and all the poets, for this creative and stimulating way to look at my work anew. Thanks also to Gary Hinesley for contributing his music to this community-building event. I am honored to have served as a conduit for some new poems from these accomplished writers, and I very much enjoyed mounting a show that is not about me but about them – not curated really so much as concocted.

A few words from our organizer, Vasiliki Katsarou:


I have known Ravenna since moving to Hunterdon County in 2002, as a fellow member of U.S. 1 Poets' Cooperative--the longest-running poetry workshop in the United States. The group was founded in 1971 by poet Alicia Ostriker and a few others, and meets in poets' homes weekly.

As a one-time filmmaker, I am drawn to the richly evocative planes and textures of Ravenna Taylor’s painting and collage—for the riddles and knots of thought and form that they suggest. Ravenna’s “Song Cycle” photographic collages brought me back to my past filmmaking when I found that I conceived of my films as a series of stills set in motion.  Now many years on, with a looser view of the filmmaking project, I am moved by the images I encounter daily—be they artworks, landscapes, dream symbols, or human gestures.

Between 2009-2015, I was the founding director and host of the Panoply Books Reading Series, a monthly poetry evening snugly housed in Roland Boehm’s antiquarian and art and design bookshop, Panoply Books in Lambertville, New Jersey. The poets included here actively participated in this poetry series, which happens to have been located just down the street from Ravenna Taylor Studio. I am grateful to all of them for providing a community quilt of poems that knits us together in this tenuous and troubling moment in the life of our country.

The liquid green gold of the world
glows, framed with darkness.
First world or memory
of first world, no difference.
Everything the same,
nameless; a swelling pulse.
Close your eyes; begin again.

Here is the moment before
leaves fan out, unfurl, each edge
articulated into blades
or hands or elephant ears,
before silver oak and eucalyptus
declare their singularities,
before the mot-mot sings in a mango tree.

No telling what’s inside
and what’s out. Only
how it waits, and gathers—
what you knew before
you knew anything.


The Frame
after Ravenna Taylor’s “Visitation 3”

the brightness between them
visible. Even

this green wants
to be held. Within

the wooden frame, another,
painted, contains

the dazzle, as the body,
planetary, contains its own. Begin

with need: of green
for the black edges

binding it, of joy for
the ache that makes it

known. Your hand
over mine: twenty-seven

bones before
the wrist begins (inside

the frame, another, then
a thousand verdant

With what keeps
such green

from spilling. With need.
With what I did not

know for so long: how
to be held, how

to bear the spring.

Here she is again, Obbligato, the one who must be obeyed,
stiff between her curtains, stiff between the scrims,

No ad libitum today, we are talking duty, obligation,
I send you an invitation, you send back the RSVP.

No getting out of this chore. As Beethoven claimed,
“I came into the world with obbligato accompaniment.”

It’s the support, the essential, what I need from you
to hold you up, what you need from me.

The onus from the Italian obligatus, obligare, to oblige
the double b required in England

but you know how it is here in America
we drop the extra letter, obligato.

Yet we are obliged, as the solemn wave
requires the sand to wash onto,

as the quilt requires its batting,
as eyes require a face.

Flay the mermaid and her backbone
runs to her fin, the burden that makes narrative possible.

Obbligato, the window that frames the sunset,
the curtains, the scrim, look again:

while you have been working, the field has been mowed,
its stubble shaved, and here’s death,

that essential underpinning, under-pining
the wood beneath the gesso,

what allows the violin to persist
until the end.

WE cannot wait
for the forest
to put its foot down –
feet, that is –  for trees
to rattle fern fronds
into fanning flames
demanding the right
to viable earth,
water, and air
for themselves.
Oh runny refuges
descending from a
blue-bleeding planet,
no longer greening,
to ward us from our own
self-imposed exile,
there is a pesticide
with your species on it
already in the making.
Come, let one who works
with paint hide you
out in the open
on a white wall
in a guarded museum.
Where those
who hear colors speak
may listen
to what you have to say
and save us.

(After a painting of the same title by Ravenna Taylor)

across dry landscape.
An edge where wet meets
moist lip of moss under

Another Migration
(After a painting of the same title by Ravenna Taylor)
As the earth warms,
birds have new stopovers.
There are fewer global upheavals
in marriage—
a prison easily walked away from
or the cage one is comfortable in.

It’s the alteration that worries me—
so much leaning on my own strength.

Below the surface no growth,
up in heaven no end in sight.
Yet, there is some peace
in knowing beauty resides briefly—

from the high shoot,
the drop into the hopper

light is a diva,  a Norma
who draws her shadow cloak
about her

dimensions are misnamed
height for depth, width for wind

but hope leaves a filigree,
a hum in the branching

this century’s hatchlings
scratch a trail onto the causeway

the chest is a net made of rust and iron

She quarried all this stone herself and dressed
Each one to fit square, plunging straight ahead
For her first step, and next. But then, distressed,
She stopped midway, uncertain where it led.

(As long as it was building, not yet boat,
Noah was a carpenter, no old salt,
But once the land went down, they were afloat,
And Noah lost his bearings. All his fault.)

To make a road, you hope instead of know.
You aim, that’s all. From there, you go on trust
And go you will. If you live, you will go.
Since she will own what she has built, she must

Shake off the weight and go. She is not done
Until she makes her way there, stone by stone. 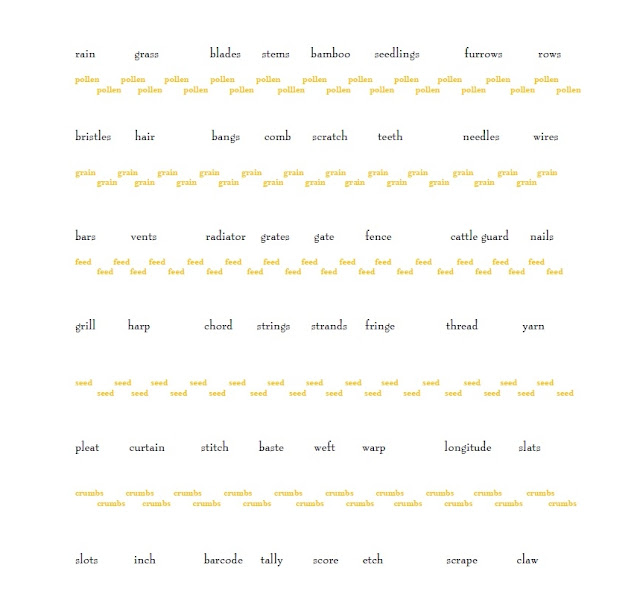 What the three children said in the furnace . . .

The Bush burns forever,
But we are consumed.
Soon we will be word-less,
Dream-less.
Every thought we have
Springs from the single word
“FIRE.”


And for my own contribution, a departure from the project as conceived: An oil painting from the 1990s, when I was writing my poems directly into the images I was making.

Light, in stealth,
has fled my room.

The blue-white light which
fled my room
drifts low among the crowns of trees.

Darkness fills, empties out through windows
and light has broken
into particles, like sands seeking—

the smallest of cracks proves passage.
Taking breath. Giving thanks.

Posted by Ravenna Taylor at 8:59 PM No comments:

Ravenna Taylor
I work in abstractions, with collages (made of my own destroyed drawings and watercolors), and oil paints on canvas or linen. I have a passion for classical song and choral music, and perform at regular intervals in Princeton, New Jersey. Walking through empty art galleries, singing, is one of my favorite pastimes. I also write poetry, and enjoy photography, knitting, and wandering flea markets, talking to strangers. You can find me on Instagram, where I am keeping a visual journal. I am not the person of the same name who is a realtor in the Trenton, NJ/Philadelphia area; in fact, I'm not "based" midway between the NYC/Philadelphia metro areas, in Hunterdon County, New Jersey; I live here.

Open an image to see them all larger, in a slide show. The options for finding older posts are located at the bottom of the page, which presents the most recent few posts as "home." I invite your participation in the comments! Please subscribe for new blog updates.

***www.ravennataylor.com*** Please visit my new website and tell me what you think!
***See also my online-only exhibition: http://www.abartonline.com/index.html
***http://ravennat.tumblr.com/*** And I'm on tumblr
and instagram: user name byzyntia

All Images and Text (except where otherwise noted): Copyright 2012-2016 Ravenna Taylor.

Some Art Blogs and Other Sites I Enjoy